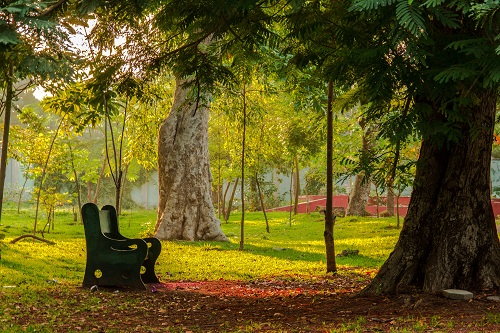 Pondicherry is a state in India, where the dominance of French culture can be majorly seen even now. Right from French street names to French food and French Villas which is best places to visit in Pondicherry,  the predominant legitimate French vibrations are still maintained.

Pondicherry’s highlights are its architecture and culture which smells and breathes of French aura and the best way to soak it up is to experience this prodigious culture on foot. The construction of Pondicherry was very much like the original French colonies in France and has perpendicular roads. There is one main canal that separates the Black Town from the White town, the French quarters lying on one side of the town and the Indian quarters on the opposite hand.

One major spotlight (place to visit in Pondicherry)of Pondicherry is the ‘French Heritage Walk’ which takes you through the white part of the town and allows you to bask in the glory of the French medieval quarters. The French architectural houses are easily recognizable with their yellow, pink or white frontage followed by the ashram quarters and Muslim quarters.

Even though the majority of the people understand and speak French, the prevailing language is Tamil followed by Malayalam and Telegu. But communication should the last on the mind because English is widely spoken across the territory.

When it comes to food, Pondicherry is like heaven for multicultural cuisine. It is a perfect blend of traditional south Indian food like Idli- Dosa as well as authentic French food like steaks and wine served by the many French cafes and Bistros around.  One major highlight is the fair of kinds of seafood that are available abundantly.

The best-recommended place to explore for experimenting with food is ‘Baker’s street bakery’ which serves excellent dishes native to France giving you a feeling of content gastronomy.

Despite the pervasive French culture, Pondicherry’s culture is one of the most diverse as well as traditional savvy. Pondicherry’s culture reflects vibrancy, diversity, ethnicity at its best. It is home to all urbane as well as all traditional festivals. Annually, the mask festival is celebrated in March where people make merry and flock around in celebrated masks and fancy costumes raving & celebrating.

Apart from that, every year on 15th August, Sri Aurobindo’s birth anniversary is observed where people gather around Sri Aurobindo ashram to commemorate this day and pay their respects. Bastille day is another popular day where fun and frolic take place as the French soldiers who were martyred are remembered and honored.

And when it comes to tradition, a layer of Indian tradition falls over the population as they observe almost every Indian festival and are avid admirers of dance forms of Bharatanatyam and Kuchipudi.

Pondicherry has always been quite popular not only to an overseas population but to the Indian population as well and in the last decade or so, it has gained a very infinite momentum in attracting people from all over the globe to be a part of its indigenous culture. Annually, there is an average record of approx. 2 lacs tourists visiting this place.

Pondicherry is one place that should definitely be visited once, be it for native or a traveler. The dynamic amalgamation of the past and present can be seen as a saga here with the past never behind but a continuous change towards the future.

Beaches, architecture, color, tradition, Carnivals, nature, everything together is Pondicherry.

Best place to visit in Pondicherry:-

Buildings, police stations, even the uniform with the occasional sighting of the Joan of Arc gives us a glimpse of the vibrant French Culture. The walk along the French part of town transports you to France and the feeling of belonging is heightened.

Combine all, and you will get a heavenly tropical paradise here. This is what makes this place very alluring to visit. The weather throughout the year is manageable.

This will only make you wonder, the reminiscences of the galore of the past. The beaches are clean and the sands hold the memories of the time. The white color reflects the sun’s rays making it almost glow.

This club is known to make you an adrenaline junkie as they provide almost all surfing tools needed for a clash between you and the sea. Any adventure the Kovalam club takes care of that. There are other small organizations who help you indulge in your passion but Kovalam provides the best services as anywhere you want to surf, they are just a call away.

This surreal place is home to people who are in their quest for tranquillity and peace. This is a perfect getaway from the urbane scene. This is a throbbing and pulsating center where people come to relax and unwind. The best part about staying here is that you will need to continuously contribute to the community by positively contributing in some way.

This place is also called ‘the ashram’ and is located in a sprawling area. The highlight here is the white marble samadhi which houses the tomb of Sri Aurobindo, a mystic yogi, and poet.

One of the other highlights is the absence of obligation which gives people the feeling of freedom obtaining spiritual discipline and mental calm.

This ashram provides excellent shelter, food and also houses a library for people keen on gaining wisdom and a balance.

This is an enigmatic cosmopolitan experimental township founded by Mira Alfassa also known as “the Mother” with an inclination towards spiritualism. It is an establishment of some 2500 people living in a very real community. The year 2018 marked their 50 years of existence. This place is also called ‘The City of Dawn’ with the presence of an international center of education. The distinguishing feature of this place is the harmonious co-existence between spiritual and material.

This town was designed by architect Roger Anger. The Aurobindo Ashram and the Auroville together is a must-visit place as it is established with the vision of human unity without war. Their wide perspectives have given a new vision to all staying there as Auroville doesn’t belong to any one person but humanity on the whole. 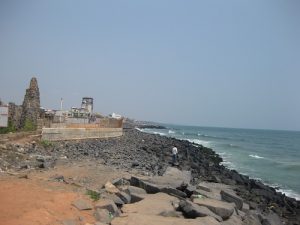 Along with Auroville, visits to the botanical garden and Matri mandir is a must.

Matri Mandir is a spiritual establishment that encourages people from across the globe to come and visit and find the balance in life which we are so missing nowadays.

This is one key highlight is Pondicherry. Located around 8 km out of town this place is like a kirk for bird lovers. This bird sanctuary houses many birds of known and rare species and people from all over, come to take the famous boat ride at a nominal fee of Rs. 50. But the experience of boating along with various species of birds on the periphery of the sunset is another story and view in itself.

This is a famous beachfront that extends 1.2 km and is a perfect place with various activities like yoga, cycling, jogging walking swimming etc. This is one area with people in the hustle and bustle and enjoying their time. This place is usually characterized by ocean spays and waterscapes.

Many landmarks like the War Memorial, the statue of Joan of Arc, the heritage Town Hall, old lighthouse, the statue of Mahatma Gandhi, the remains of the old pier, Dupleix Statue and the old customs house makes it a hot spot for tourists.

This place is like the shopper’s paradise for all the exhibits you can buy from here at nominal prices. Right from Candles to rare handmade paper and terracotta lampshades, this place is like a treat to sore eyes. This is also the hubs to various fabrics like fabric like corduroy, twill, satin, Khadis, leathers, and Oxford offering a plethora of options to buyers.

Pondicherry is well accessed by flights through Chennai airport, this being the nearest.

The closest station will be Villupuram connecting to all major rail hubs in the country.

Pondicherry is well accessible through taxis or hire cars from Bangalore, Mumbai Goa etc. Cars for hire are also available nowadays within the city.

Pondicherry – A glimpse through Golden Chariot:

A very interesting one day tour is also conducted by the luxury train ‘Golden Chariot’ as it passes through Pondicherry in its 7 days journey. This train takes you to Pondicherry on Day 3 and gives you an entire day to visit covering places like Auroville, Sri Aurobindo Ashrama and beach walks.  If anyone needs to see Pondicherry in a nutshell and without missing out on major places then this is a perfect ride.

The weather of Pondicherry:

Even though this place is accessible entirely throughout the year, the best time to visit  Pondicherry is the winter months from October to march before the land gets heated up again due to its tropical climate.

The other half of the year is usually wet and sweaty owing to its tropical showers.

Overall, Pondicherry is like a treasure trove of India, that reminds you of the glorified past and present at the same time and something that should never be missed.

Top 5 Most Romantic Places to Visit in Manali